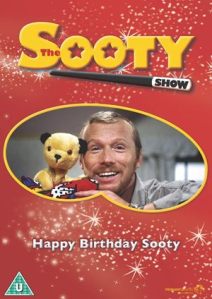 I had another nostalgic birthday present this Christmas. As well as the ‘Rainbow’ DVD I had, I also had a DVD of ‘The Sooty Show’ featuring Sooty, Sweep and Soo with Matthew Corbett as the presenter. I used to love watching ‘The Sooty Show’ on VHS and ‘Sooty & Co’ on TV when I was a kid. 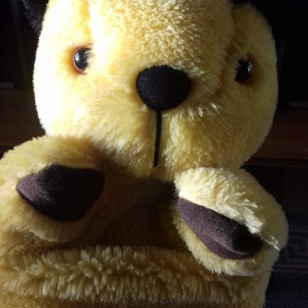 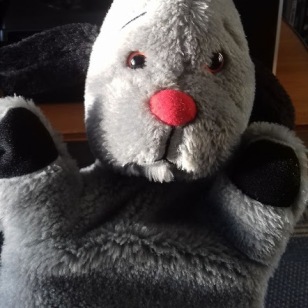 I also saw ‘Sooty Heights’ on TV as a kid with the current ‘Sooty’ presenter Richard Cadell. I love Sooty and Sweep, as clearly indicated in the photos above. 😀 I’ve talked about Sooty a couple of times in two ‘Advent Calendar’ blog posts from 2015 and 2016. I hold very happy memories of Sooty.

So, it was lovely to revisit my childhood by watching this special ‘Sooty Show’ DVD featuring Matthew Corbett, who took over from his father Harry Corbett in the 1970s. Most of the ‘Sooty Show’ episodes I watched on VHS were from the 1980s and 1990s, which I greatly enjoyed watching.

‘Happy Birthday Sooty’ was broadcast on the 5th of October 1992 to celebrate 40 years of the character. Yeah, it’s amazing that Sooty began in 1952 and is currently running at about 68 years old. Pretty soon in 2022, it will be Sooty’s 70th anniversary. Sooty is still 5 years according to the show. 🙂

Also in the episode, Matthew and Sooty get to go and explore ‘The World of Sooty’ museum in Yorkshire. Sadly, the museum is no longer around. 😦 A nice surprise happened at the end of the episode since Rod, Jane and Freddy from ‘Rainbow’ appeared, singing a nice birthday song to Sooty.

I wasn’t expecting them to appear in the episode. Having seen the ‘Rainbow’ DVD recently, it was so surreal. I do recall Rod, Jane and Freddy appearing in an episode of ‘Sooty & Co’ once. 😀 Matthew worked with Rod and Jane once and apparently there has been a ‘Sooty’/’Rainbow’ crossover on TV.

In terms of the other two episodes, they were pretty entertaining. They come from the late 1980s. ‘Sooty Wants a Pet’ from 1989, the year I was born, has Sooty, Sweep and Soo wanting a pet but being unable to decide what to get. Sweep suggests a dog, but this might mean losing dear Sweep! 😦

Oh of course not! Matthew, Sooty and Soo were only teasing Sweep. 😀 It was funny when Sooty and Matthew tried to train Sweep for an act and failed miserably. Matthew also takes Sooty and Sweep to see some police dogs being trained and sings the song ‘A Dog is a Man’s Best Friend’ in the tale. 🙂

I have seen ‘Honking Nose’, also from 1989, already as it’s featured on the ‘Sweep Superdog’ DVD compilation I’ve got. I still love that episode as it features Sweep having a honking nose and ringing ears. This comes from playing with Sooty’s magic wand. Sooty, Matthew and Sooty don’t realise till the story’s end. 😀

It was funny to see Matthew and Sweep investigating by going into town and seeing everyone else having ringing ears and honking noses. Later on, Matthew sings a song with Sooty, Sweep and Soo called ‘The Dog with the Nose that went Honk’, written by Soo herself, which was enjoyable to hear.

I’ve enjoyed rediscovering my childhood recently with the ‘Rainbow’ and ‘The Sooty Show’ DVDs I’ve had. It’s helped to keep my mind off things during the current climate we live in – please keep safe. I’m sure I’ll be revisiting some of these classic children’s shows of ‘Rainbow’ and ‘Sooty’ on YouTube soon. 😀