‘PLAGUE OF THE DALEKS’ 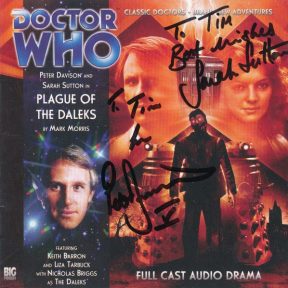 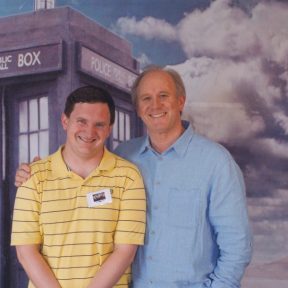 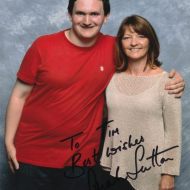 I’ve enjoyed ‘The Stockbridge Trilogy’ so much!

‘Plague of the Daleks’ is the third and final part of this trilogy of stories set in the lovely English village of Stockbridge. It’s the most thrilling; exciting and chilling ‘Doctor Who’ story I’ve heard. It’s a great way to conclude ‘The Stockbridge Trilogy’ by having the Fifth Doctor and Nyssa face the Daleks.

This is a four-part story by Mark Morris. Unlike the comical historical romp in ‘Castle of Fear’ and the sensational present-day (sort of) piece in ‘The Eternal Summer’, this is a story set in the future with a dark tone, elements of gruesome horror and is certainly a ‘thriller’ as was the intention by the writer.

I’ve had my CD cover of ‘Plague of the Daleks’ signed by Peter Davison at the ‘Regenerations 2016’ convention in Swansea, September 2016 and the lovely Sarah Sutton at the ‘Collectormania Glasgow 2012’ convention in August 2012. As I stared before in my review for ‘The Eternal Summer’, the Stockbridge stories are my favourites. Sarah told me they’re her favourites too!

Peter Davison, Sarah Sutton and Liza Tarbuck in ‘Plague of the Daleks’.

The story has the Doctor and Nyssa arrive back in Stockbridge after escaping the time bubble from ‘The Eternal Summer’. They find themselves at the last point of Stockbridge’s history. The village has now become a historical heritage centre and is now the last surviving outpost of humanity on Earth.

The Doctor and Nyssa meet Isaac Barclay and his daughter Lysette who run the heritage centre and are guides for the tourists who come to visit Stockbridge from outer space. But pretty soon, it starts to rain and clone villagers get turned into zombies and the Daleks come out of hiding for the Doctor.

This story kept my interest throughout. Having the Doctor and Nyssa drive the story forward from their point of view in ‘Part One’ was really refreshing. I enjoyed their friendly banter when they make their way through winter; get attacked by crows and enter a house before finding themselves in spring.

Writer Mark Morris has had his share of zombie stories, but this particular zombie story kept my interest with those chilling scenes of rainclouds breaking open and the rain hitting the clone villagers before turning them into zombies. It was very gruesome to listen to the scenes of graphic violence.

Before listening to this story in February 2010, I’d just met Sarah Sutton at a ‘Doctor Who’ convention. It was the first of many visits and it was very well worth it. I found Sarah very kind; friendly and lovely. I was pleased to hear ‘The Stockbridge Trilogy’ at the same time I first saw Sarah.

In ‘Plague of the Daleks’, I found Nyssa’s story more interesting than the Doctor’s. She drives most of the story forward and I liked it when Nyssa demonstrates her ability to work things out; take charge of situations and keep everyone calm. She can handle dangerous situations and keep a cool head.

I was thrilled when Nyssa sees the Dalek for the first time and is terrified, as she remembers them from ‘The Mutant Phase’ and ‘Renaissance of the Daleks’. Sarah must be very pleased to have met the Daleks in audio as Nyssa. Nyssa has met the Daleks six times on audio and has also faced them in Dalek stories by me, including ‘Doom of the Daleks’ in ‘The Fifth Doctor by Tim Bradley’ series.

Peter Davison is excellent as the Doctor in this. Peter’s Doctor goes under a lot of strain as he tries to solve the problem of why the clone villagers are turning into zombies by the rain. When one drop of rain hits his skin, the Doctor does everything he can to keep control before bumping into the Daleks.

Peter has had more Dalek adventures in audio compared to the TV series. To be honest, I’ve enjoyed his audio adventures with Daleks compared to his only TV story ‘Resurrection of the Daleks’. The Daleks audios are more interesting; compelling adventures, especially as he shares them with Nyssa.

Keith Barron (from ‘Enlightenment’) guest stars as Isaac Barclay. He is a down-to-Earth gentleman and he welcomes visitors to Stockbridge. I liked it when he complains about the futuristic version of ‘the national trust’. It was so sad when Issac got killed by the Daleks after he was under their control.

Lisa Tarbuck guest stars as Lysette Barclay, Issac’s daughter. I enjoyed Lysette’s scenes with Nyssa as she gets to be her companion and joins her on the adventure. Like Isaac, Lysette’s is a down-to-Earth person. It was a shock when she turns out to be under Dalek control and threatens Nyssa with a gun.

I liked Barry McCarthy and Richenda Carey as married couple Vincent and Alexis Linfoot. They put me in mind of Hyacinth and Richard Bucket (sorry ‘Bouquet’) from ‘Keeping Up Appearances’. I felt sorry for Vincent who was nice whereas Alexis wasn’t. It was horrible when he turned into a zombie.

The Daleks don’t appear until the end of ‘Part Two’. It was a long wait, considering the story’s title. The Daleks are menacing and ruthless as ever. I liked some of the Daleks’ lines and was spell-bound by that scene where one of the Daleks couldn’t function properly and requests to be exterminated.

I’ve seen a few YouTube videos of some well-animated scenes from ‘Plague of the Daleks’. I found them exciting to watch. Nicholas Briggs does a fine job bringing the Daleks to life on audio, and I enjoyed it when the Daleks have ‘frogs in their throat’ and were infected by their own rain plague.

The final scenes where Lysette destroys Stockbridge really hit home for me. She’s too distressed and overcome with grief at the loss of her father. She rages with the Dalek thoughts inside her. It was so dramatic and a horrible way for the story to end. It was very moving and heart-breaking to listen to.

The final scene in the TARDIS is touching, as the Doctor and Nyssa watch Stockbridge being destroyed. It struck a chord when the Doctor mourns for the loss for his favourite village. Nyssa comforts him and the Doctor quotes ‘The Deserted Village’ by Oliver Goldsmith which was very nice.

The CD extras are as follows. On Disc 1, there’s a trailer for ‘A Thousand Tiny Wings’ with Sylvester McCoy. At the end of Disc 1, there are behind-the-scenes cast and crew interviews, including Peter Davison, Sarah Sutton, writer Mark Morris; script editor Alan Barnes; director Barnaby Edwards, etc. 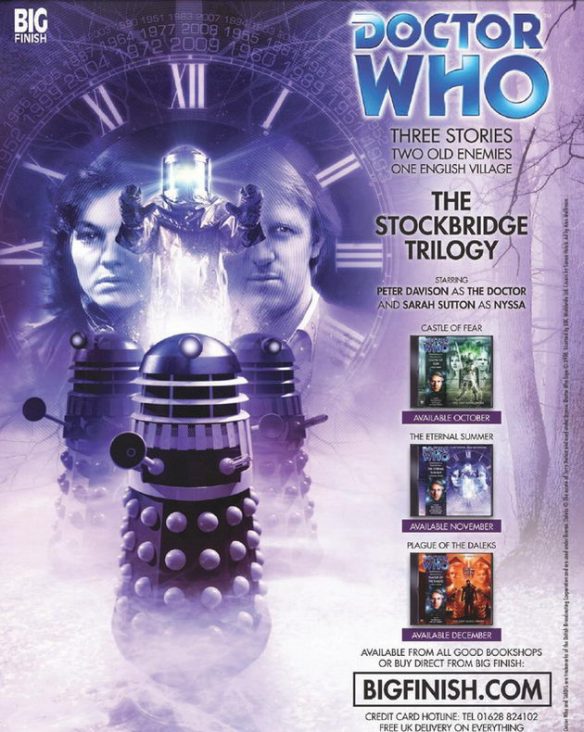