‘THE ANDROIDS OF TARA’

This story is based on the classic novel ‘The Prisoner of Zenda’ by Anthony Hope. I’ve not read the book or seen the film, but I was instantly captivated into this swashbuckling adventure with androids.

The Doctor and Romana visit the planet Tara, where Romana finds the fourth segment of the Key to Time easily. But they’re soon caught in a power struggle, as Count Grendel intends to be King of Tara.

The fourth segment of the Key to Time happens to be a stone statue of an animal’s head.

This is a story about double trouble, as androids get used in a medieval-alien setting to duplicate another person. This story focuses on Mary Tamm’s Romana, as Grendel uses her in his evil schemes.

The story is well-directed by Michael Hayes, who makes his first contribution to the series. The sunny atmosphere for Tara fits well to the action-packed plot and the beauty of this medieval world. 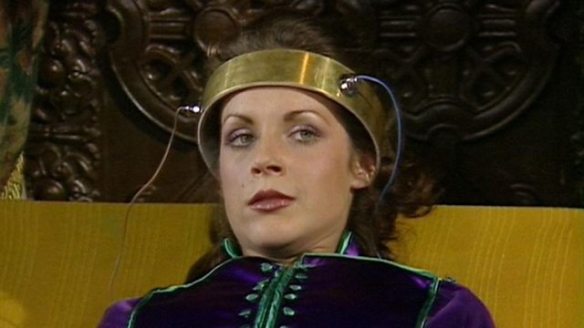 Mary Tamm delivers a wonderful performance as three characters. She plays Romana; Princess Strella and android copies of Romana and Strella. The android Romana is serious and quite creepy.

Tom Baker delivers a superb performance as the Doctor with his eccentric humour and ‘bonkers’ manner. He gets involved with the power struggle of Tara, when he knows how to mend androids.

K-9 (voiced by John Leeson) gets a huge amount in this. As well as tracking Romana at Grendel’s castle, K-9 helps the Doctor when he detects the android Romana and cuts through a wall to escape. 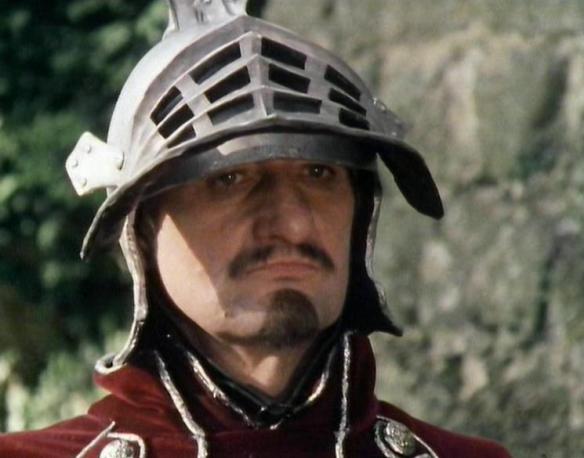 The story’s guest cast includes the great Peter Jeffrey as the villainous Count Grendel. Peter clearly relishes playing Grendel and is great delivering the balance of menace and humour in the character.

There’s Neville Jason as the charming and heroic Prince Reynart. Neville also gets to play an android copy of the Prince that becomes the King, whilst the real Prince gets locked up in a dungeon with Romana. 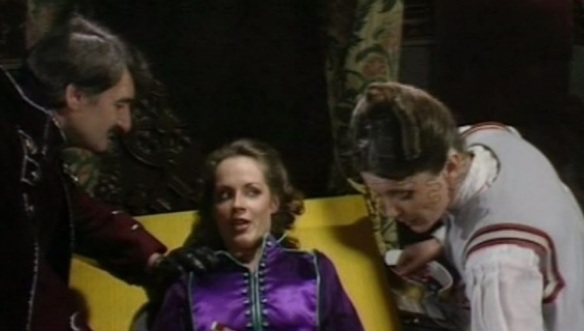 There’s Lois Baxter as Lamia, Grendel’s android-maker and Martin Matthews as Kurster, Grendel’s captain of the guard. There’s also Declan Mulholland as Till and Cyril Shaps (who I’ve seen in an episode of ‘Some Mothers Do ‘Ave Them’ as well as ‘Doctor Who’) as the Archimandrite.

There’s a marvellous sword-fight between the Doctor and Count Grendell. I was thrilled to see Tom Baker’s Doctor do some sword-fighting and you can see where the Tenth Doctor got his sword-fighting from. 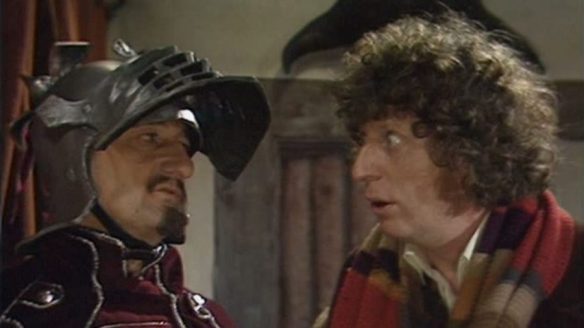 The DVD special features are as follows. There’s a making-of documentary called ‘The Humans of Tara’; the ‘Now and Then: The Androids of Tara’ featurette and the ‘Double Trouble’ documentary.

There’s a photo gallery of the story and a commentary with Tom Baker, Mary Tamm and director Michael Hayes. There’s also an info-text commentary option and a ‘Radio Times Listings’ PDF of the story.

There’s a coming soon trailer for ‘Planet of Evil’ with Tom Baker and Elisabeth Sladen.

‘The Androids of Tara’ is a fantastic story in ‘The Key to Time’ season. I enjoyed every minute of it with the Doctor, Romana and K-9 as the heroes and Peter Jeffrey as the villainous Count Grendel.

‘DOCTOR WHO – THE ANDROIDS OF TARA’

The Story of Tara

David Fisher returns with another novelization/audiobook on a classic ‘Doctor Who’ story!

‘The Androids of Tara’ is my third favourite story from ‘The Key to Time’ season of ‘Doctor Who’ with Tom Baker and Mary Tamm. I didn’t immediately purchase the audiobook when it was released on CD. I was delighted to find that it was available and I was looking forward to the chance of hearing it.

I purchased the audiobook of ‘The Androids of Tara’ as a download via Audible. Again, this was a brand-new direct novelization of the story by David Fisher which he did for 2012. The story was first novelized by Terrance Dicks for the Target novelization range of ‘Doctor Who’ books from the 1970s.

When it came to the novelization/audiobook of ‘The Androids of Tara’, I was expecting the same quality of detail and enjoyment as I had with ‘The Stones of Blood’. I did gain some enjoyment from listening to the audiobook and found how I was delving more into the alien Zenda-like world of Tara.

I suppose it made sense to divide the audiobook with a prologue and four episodes in five chapters, since this was direct-to-audio and listeners can treat this as a four-part story like it was for TV. But for me, I like the story to be broken up into many chapters in order to absorb each aspect of the tale.

The novelization/audiobook is read by John Leeson, who voiced K-9 in the ‘Doctor Who’ TV series. I was pleased to hear John read this story. Although I am surprised that Paul Lavers didn’t read the audiobook with John Leeson as K-9, since he was enthusiastic about the story in the DVD interviews.

John Leeson however is engaging and easy to listen to throughout whilst reading the novelization/audiobook. Beforehand I heard John provide the linking narration for the TV soundtrack CD for ‘The Pirate Planet’. It was fun to hear him reading the story as well as voice K-9 at the same time.

In the audiobook, John Leeson gets to voice for many of the characters in the story including the Doctor, Romana, Count Grendel and many others. I don’t think John does exact impersonations of the characters, but he manages to get the tone of what they sound like from watching the TV story.

As I said before, the first chapter of the audiobook focuses on the history of Tara before the story begins. This was interesting to listen to, especially as there were certain things about Tara I didn’t know about, including the plague that killed many of the peasantry and to which the nobles avoided.

It’s clear in the TV story as well as the novelization/audiobook that ‘The Androids of Tara’ was based on ‘The Prisoner of Zenda’ by Anthony Hope. I’m not sure how many influences David Fisher used from ‘Zenda’ into ‘Tara’, but I’m assuming he did elaborate more of this inspiration in the audiobook.

The relationship between the aristocracy and peasantry is expanded upon in the novelization/audiobook. This was touched upon in the TV story, but it was intriguing how characters like Romana and the Doctor responded to the nobles like Prince Reynart’s dismissal of the peasantry.

Interestingly, there is more given about the history of the Gracht family tree to which Count Grendel comes from. One of the family members happens to be called Zagreus. This surprised me when I first heard it! Zagreus’ name was repeated a number of times whilst I heard the novelization/audiobook.

It can be forgiven that David Fisher didn’t know that there was a Zagreus in Gallifreyian history, including a Big Finish audio drama under the same name. Then again, there was the seal of Rassilon on the planet Voga in ‘Revenge of the Cybermen’. Maybe there’s a connection between the two, hey?!

I enjoyed the relationship developed between Count Grendel and Madam Lamia as it was explored and developed upon in the story. Madam Lamia clearly loves Grendel and it was interesting how much depth there was to that relationship. Grenel however is dismissive of Lamia, despite their past.

In Chapter 2 of the story, Romana is being chased by a wood beast called a rhino-bear. I could easily imagine the rhino-bear being more convincing to what it eventually ended up being in the TV story. Romana finds herself being chased by it, before she locates the fourth segment of the Key to Time.

Also in the story, Count Grendel had set out to fight a robot rhino-bear in the woods, which was built by Madam Lamia. This was detailed in Chapter 1 before Grendel fought a real one in Chapter 2. Grendel attempts to say “Excelsior!” in order to shut the robot beast down. This of course doesn’t work!

I did find whilst listening to the audiobook that many of the characters’ dialogue and action scenes were paraphrased compared to what was shown in the TV story. This was disappointing as I was expecting more of the action as the Doctor, Zadek, Farrah and android Reynart went into the tunnel.

I suppose it makes the story pacier by not detailing into too much into the action scenes and getting on with the plot of the story. But with ‘The Androids of Tara’ being an action-packed story, I was expecting the action sequences to be detailed as much as the plot-driven scenes featured in the tale.

There was a flashback scene that I liked in the audiobook when it’s revealed how Princess Strella was kidnapped by Count Grendel. It was also interesting how Strella and Grendel knew each other as children and how Strella had grown up to regard Grendel as the lowest of men she’d met in her life.

Even in the scene between her and Count Grendel in her prison cell, Strella immediately shouts in anger at him before he can speak. This didn’t happen in the TV story as Strella remained silent before Grendel spoke to her. I suppose David Fisher was making Strella feistier compared to the TV version.

The climax of the story has changed compared to how it was shown in the TV story. In the audiobook, when the Doctor and K-9 get into Count Grendel’s castle via boat, K-9 in the boat drifts away quickly after the Doctor gets inside. This removes the comedic ending with K-9 in the TV story.

However, when Count Grendel escapes his sword-fight with the Doctor by jumping into the castle moat, K-9 manages to prevent him getting into the boat by firing his nose-lasers at him. This was unusual and didn’t feature in the TV story, so why David Fisher changed that is so beyond me really.

There’s also a moment when the Doctor rings a bell to signify the death of Count Grendel. This is heard by the gathering in the ‘wedding’ between Romana and Reynart. It was interesting how Grendel reacted to that and prompted the Archimandrite to marry the Prince and Romana together.

Also, the sword-fight seems to be swift in the storytelling during the audiobook which was slightly disappointing. Also the Doctor asks Reynart where the door controls are to let Zadek and the others into the castle. This was different on TV, since it was Reynart who opened the doors, not the Doctor.

The story ends rather differently to how it was in the TV version. Rather than Reynart reuniting with Stella in the cell (which doesn’t happen in the audiobook at all), Romana returns from the cell to reunite with the Doctor with the fourth segment of the Key to Time. No concern for Strella anyone?!

Also when the Doctor gets Reynart to pay for his services on Tara, the scene changes to the new day where the Doctor is fishing again and having a fishing licence for it. Again, this didn’t happen in the TV version of the story, so why David Fisher decided to end the story on that note is so mysterious.