This was a two-day event held at the Village Hotel in Swansea. It went from Saturday the 18th to Sunday the 19th of September 2010 and was run by Cary Woodward. These ‘Doctor Who’ Swansea conventions had been going on for a while since 2005, the year when the TV show was resurrected.

‘Regenerations 2010’ was a great convention, especially as I saw Sarah Sutton for the second time since ‘Fifth Element’. I saw her for both of the two days and was really happy coming away with having spent more time with Sarah, chatting to her during the signings and having a photo with her. 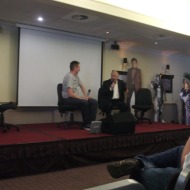 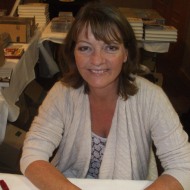 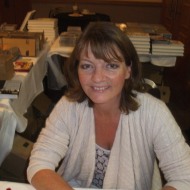 So how did this weekend begin for me? Well it began with arriving at the Village Hotel on Saturday itself, before going in and enjoying the opening ceremony of the convention. Then there was a panel talk with Terry Molloy, so well-known for playing Davros in ‘Doctor Who’, conducted by Charlie Ross.

There was then a panel talk with Deborah Watling, who played Victoria in the TV series, conducted by David Bickerstaff. I didn’t get to meet or chat to Debbie for the first time at ‘Regenerations 2010’ since that would happen at later conventions. I took a photo a 1960s movie Dalek at the convention.

I asked Sarah if she found the Big Finish audios had helped to develop Nyssa’s character and whether they were the sort of stories she’d like to have done in the TV series. She said “WOW, Yes!” and that they’d helped to extend the character. I was very pleased Sarah got to answer my question.

I later saw Sarah in the afternoon for a signing session and had a nice chat with her. I got to chat up with her since seeing her at ‘Fifth Element’ and took some photos of Sarah at her desk where she was signing things with Big Finish. If I say it myself, I took some really good photos of Sarah that day. 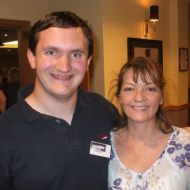 I also got to see Sarah again later that day. Back then, I didn’t realise Sarah was there for the two days of the weekend. I had two photos of me with Sarah taken by Lisa Bowerman that day, which I was happy about. I asked Sarah if she would write her own autobiography, but she wasn’t keen on it.

During the day, there was a panel talk with David Warner, who I would get to meet proper at future conventions. I also met Colin Baker, the Sixth Doctor, for the very first time at ‘Regenerations 2010’. I had a happy time meeting Colin that day, as I chatted to him for a signing and had a photo with him.

I also met Julian Glover, who played Scaroth in ‘City of Death’, that weekend. I saw him on the Saturday to have him sign a photo of himself from ‘For Your Eyes Only’ on behalf of my best mate, Stephen. On Sunday, I had a professional photo taken of me with Julian Glover and I also attended his panel talk that day.

The day finished for me with attending a panel talk with Anneke Wills and Colin Baker that day. We then had the closing ceremony, which saw all the guests who attended that weekend saying goodbye to the fans. The organiser, Cary Woodward, also wished us a safe journey home on the day.

Stay tuned for my next ‘convention memories’ blog post, which will be on the ‘London Film and Comic Con’ that I attended in July 2011.