I’ve had another exciting weekend since I attended the ‘Film & Comic Con Cardiff’ from the 9th to the 10th of March in 2019! This for me was the second of two comic con weekends in March and the event was closer to home. In the first weekend of March, I attended the ‘London Comic Con Spring’.

This wasn’t the first time I attended a comic con in Cardiff. Oh no! The first time was back in March 2014. Cardiff currently has comic con events like this twice a year and they’re run by Showmasters Events – the same organisers who did the ‘London Comic Con Spring’. Thankfully the event wasn’t so busy as London was. 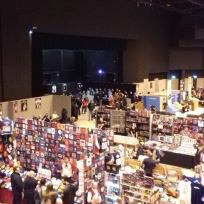 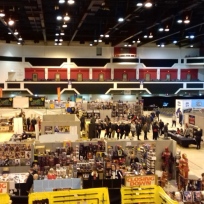 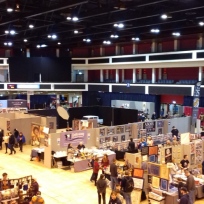 I knew what to expect when I attended the Cardiff comic con event this March. It was five years since the last time I attended, but I was able to enjoy the event and find my way around. The ‘Film & Comic Con Cardiff’ was held inside the Motorpoint Arena and I found it pretty easy to get to. 😀

Sarah Sutton, my favourite ‘Doctor Who’ companion and best friend was there attending the Cardiff comic con. I’ve been lucky to see Sarah at two events in March both in London and Cardiff. Seeing Sarah at the Cardiff event was great since I enjoyed chatting and sharing with her on the Saturday! 🙂

So what can I share about this event and what were the highlights. Well, like I said, it wasn’t as busy as London was. It was busier on the Saturday, which was the main day for me, but I was still able to enjoy that day of the weekend. I achieved all that I wanted (and more) and met up with a lot of stars and friends. 😀

Here are the highlights of the weekend for me. 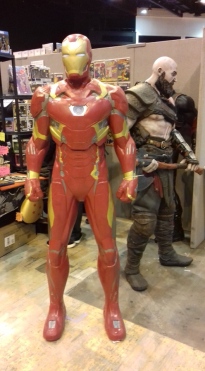 Like I said, Saturday was the main day for me. First of all, I took a number of photos of some displays and cosplayers at the event. There was a display of Iron Man that I liked as well as cosplayers dressed up as Darth Vader from ‘Star Wars’ and the Red Mighty Morphin Power Ranger from ‘Power Rangers’. I was so impressed by how many cosplayers were there. I even chatted to them. 🙂

I did a fist bump with the Red Ranger, saying “May the Power Protect You!” 😀 I also went around many of merchandise stalls. There were so many items being sold at the event that it was difficult to decide what to buy. On the Saturday, I purchased a 1975 ‘Star Trek’ annual. It contains comic strips of Gold Key comic stories from the 1960s and 70s which I’m really looking forward to checking out. 🙂

I of course met up with my favourite ‘Doctor Who’ stars that Saturday. They included Sarah Sutton; Wendy Padbury and Colin Baker. Mark Williams was also at the event. Many of you will know him for being in the ‘Harry Potter’ films. But for me, he played Maxwell Edison in ‘The Eternal Summer’ as well as Brian Williams, Rory’s dad, in ‘Dinosaurs on a Spaceship’ and ‘The Power of Three’ from Series 7.

I was so pleased to see Sarah Sutton (Nyssa in ‘Doctor Who’) again at the Cardiff event. In the week leading up to the comic con, I coloured in the black-and-white version of the latest artwork Sarah had done with felt tips. I purchased it the weekend before in London. Sarah was impressed by my colouring-in efforts that she actually signed my version of the artwork for me. I’m so pleased I impressed her! 😀

I had some nice photos with Sarah that day as well as some nice chats with her. My parents were attending the comic con that day and my Dad even shared some photos he took of Sarah at the event which was nice. Sarah and I did a sketch together which I recorded on my Samsung phone. I won’t release it today. It’s a sketch for a very special occasion. Stay tuned and wait and see! 😀

I shared with Sarah two Nyssa trading cards that I purchased from Amazon. I had the Season 19 Blu-ray booklet signed by Sarah. And I even shared the latest ‘Complete History’ book of ‘Doctor Who’ with Sarah as it featured the story ‘Dimensions In Time’. We enjoyed looking through the ‘Dimensions In Time’ section of the book, commenting about the actors who appeared in the two-part anniversary story.

It’s amazing how much I’ve come this far in my attending conventions; meeting Sarah Sutton and becoming friends with her over the years. I enjoy sharing my love of ‘Doctor Who’ and Nyssa with Sarah as well as sharing jokes; small talk and chatting about other interests Sarah and I have. I’m looking forward to the next time I see Sarah at a comic con since she always seems pleased to see me.

It was lovely to meet up with Wendy Padbury (Zoe in ‘Doctor Who’) both Saturday and Sunday. The last time I saw Wendy was at the ‘Regenerations 2016’ convention in Swansea. I enjoyed chatting to her that Saturday and was pleased to have my CD cover of ‘The Wheel In Space’ signed by her. I enjoyed chatting to Wendy about what she thought of Jodie Whittaker’s Doctor as she seems to approve of her.

I also enjoyed chatting to Wendy about her role in the original 1974 theatre production of ‘Seven Keys to Doomsday’; doing ‘Behind The Sofa’ with Janet Fielding and Sarah Sutton for the Season 18 Blu-ray box set and doing the ‘Super Safe with Super Ted’ cartoon video with Jon Pertwee. I was pleased Wendy was interested when I told her about the short story I wrote featuring Zoe called ‘Brain and Heart’. 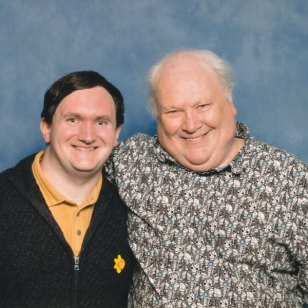 It was nice to see Colin Baker (the Sixth Doctor in ‘Doctor Who’) again event as well as seeing Mark Williams for the first time. I’m glad Mark signed the CD cover of ‘The Eternal Summer’ for me as I enjoyed him as Maxwell Edison in that Big Finish audio. We also had photo shoots with the stars that afternoon. I’m pleased to have had my photo shoots with Sarah, Wendy, Colin and Mark that Saturday. 🙂

I also saw Tom Mitchell and his mum Bev (not ‘Beth’ as I’ve been incorrectly calling her on my blog – sorry about that, Bev) who’ve been following my ‘Bradley’s Basement’ blog and meeting Sarah Sutton at these comic cons that I’ve been going to. It was lovely to see them again and I even had a photo with Sarah and Tom at the event. I wasn’t expecting that. I really like the photo between us three. 🙂 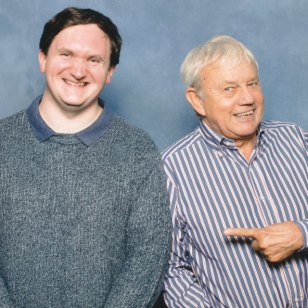 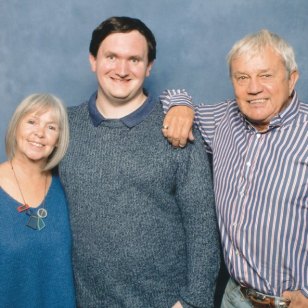 The Sunday was quieter than the Saturday. It wasn’t as exciting as the day before, but I still enjoyed attending the Sunday and was pleased with what I achieved that day. I attended the panel talks featuring Frazer Hines and Wendy Padbury as well as an ‘Allo, ‘Allo’ talk featuring Vicki Michelle and Francesca Gonshaw. I did take photos of the talks with my phone, but they’re not very good.

I won’t share my photos of the talks on my blog sadly. I found the Frazer Hines and Wendy Padbury talk very enjoyable, especially when they shared ‘Doctor Who’ memories and working with Patrick Troughton overall. I found the ‘Allo, ‘Allo’ talk interesting and found Vicki Michelle and Francesca Gonshaw entertaining. I even asked Francesca Gonshaw a question during the panel talk. 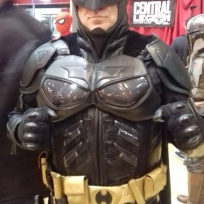 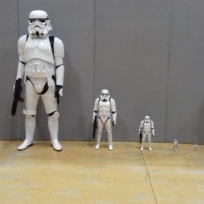 I met more cosplayers at the event including Batman. I had a nice chat with Batman who made sure no Jokers or Riddlers were causing trouble. 😀 There was also a Mondasian Cyber Controller who I had a nice chat with. 😀 There was also a display of ‘Star Wars’ Stormtroopers with scales of size going from tall to minuscule. I’m pretty sure one of the Stormtroopers moved in that display. 😀

I had a chance to see Frazer Hines (Jamie in ‘Doctor Who’) who signed ‘The Wheel In Space’ CD cover for me as well. I also said hello again to Wendy Padbury that day too. I also met Vicki Michelle who played Yvette in ‘Allo, ‘Allo’ as well as Francesca Gonshaw who played Maria in ‘Allo, ‘Allo’. I had some photos signed by them that day as well as some nice chats with them. They’re the first ‘Allo, ‘Allo’ stars I’ve met at an event!

The day ended with me having photo shoots with Frazer Hines and Wendy Padbury that day, which was great. I also purchased a ‘TNG’ Starfleet comm-badge and rank pips from a ‘Star Trek’ merchandise seller who was a captain. I had a great time chatting with him about ‘Star Trek’ in general as well as the ‘Destination Star Trek Birmingham’ convention which I attended last year in October 2018.

I also met up with friends from work as well as from my local church attending the event. I also met up with James (Whiskeybrewer) from ‘The Divergent Universe’ forum for the first time. I was so amazed and thrilled to meet James that weekend. He’s the first person from ‘The Divergent Universe’ forum that I’ve met in real-life. He was a nice chap to meet as we got chatting very well that weekend.

I’ve had a lovely time attending the ‘Film & Comic Con Cardiff’ this March. It was lovely to meet the guests and the attendees I came across that weekend. Saturday was the highlight for me as I enjoyed seeing Sarah Sutton; have nice chats with her as well as get things signed and have photos taken with her. I do feel sad when events like these come to an end and I have to go back to reality.

But I am reassured that I will see Sarah again at a future comic con event. I’m looking forward to when I see Sarah next time at a future event as well as attend another event with other guests there. I have some plans in mind for future comic cons. What they’ll be, I’m sure to find out in due course in 2019.

Remember! Stay tuned for a special sketch between me and Sarah on my blog coming soon!