I found my first two convention experiences in 2010 exciting! In early 2011, I decided I wanted to go to another convention and hopefully attend one where my favourite ‘Doctor Who’ companion, Sarah Sutton, would be attending. I felt so lucky when the news of another convention came in March 2011.

Sarah Sutton would be attending the ‘London Film & Comic Con’ at Earl’s Court 2 in London, July 2011. But it wouldn’t be just Sarah Sutton. There would also be a plethora of other ‘Doctor Who’ stars attending as well as stars from movies and TV shows I enjoyed watching over the years. It was exciting! 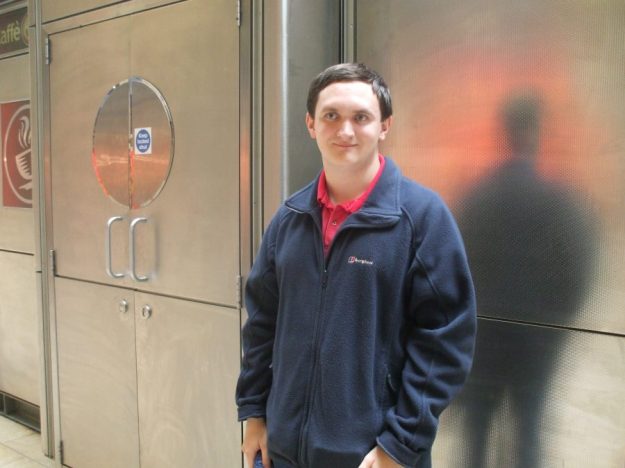 I recall getting up very early on Saturday the 9th of July when attending the event. It was a gloriously sunny day once I arrived in London at Paddington station before taking the tube train to get to Earl’s Court where the event was held in Earl’s Court 2. I was all nerves and excitement on that particular day.

The ‘London Film & Comic Con’ in July 2011 was unlike any convention event I attended. For one thing, it had more guests attending compared to the previous two smaller ‘Doctor Who’ events I attended. It was also busier with so many attendees that came to see their favourite stars at the event.

It was also a pretty expensive event since many of the guests attending had autograph prices that were pretty pricey for me as well as photoshoot prices and panel talk prices. For this event, I decided to see the people I wanted to see the most and that included the ‘Doctor Who’ stars like Sarah Sutton.

By the way, this was a three day event from Friday the 8th to Sunday the 10th of July 2011. I attended Saturday the 9th only as Sarah Sutton was only attending that day. I recall how nervous I was before I’d entered the Earl’s Court 2 building; seeing large queues of attendees in fantastic cosplay costumes. 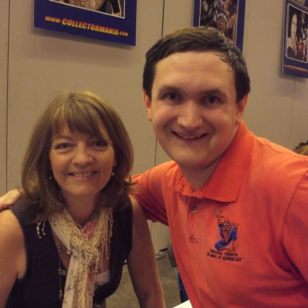 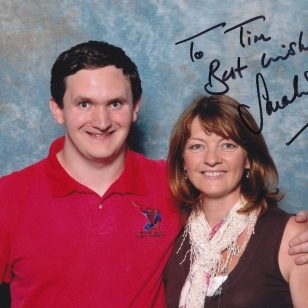 I was delighted to see Sarah Sutton again for a third time at the ‘London Film & Comic Con’. She recognised me from the previous convention and I was stunned she remembered me. Sarah shared she was going to the ‘Regenerations 2011’ convention in Swansea later that year in September 2011. I was happy she said that to me.

Sarah signed three items for me at the event including the CD covers of ‘The Demons of Red Lodge and Other Stories’, ‘Spare Parts’ and ‘Castle of Fear’. I was so pleased Sarah signed those CD covers for me. I shared how much I enjoyed those stories and she shared me how much she enjoyed them too. 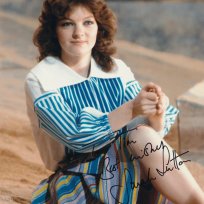 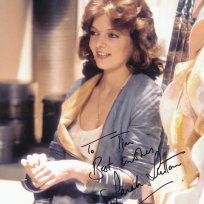 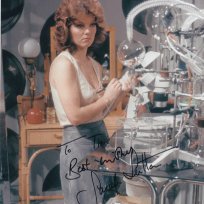 I also purchased a few photos of Sarah as Nyssa from ‘Snakedance’, ‘Mawdryn Undead’ and ‘Terminus’ to which she signed them for me. I also had a photo with Sarah with my digital camera as well as having a professional photo shoot with her. Sadly, there wasn’t a panel talk with Sarah during the day.

I wish I had more opportunities to see Sarah more than once at her signing desk that day, rather than just seeing her for one signing session and at the photo shoots. I managed to say goodbye to her before I left that day. I was really looking forward to seeing Sarah Sutton in Swansea, September 2011.

As well as seeing Sarah Sutton, I also got to see Sylvester McCoy and Sophie Aldred for the first time. They played the Seventh Doctor and Ace in the ‘Doctor Who’ TV series. I didn’t get to have a photo shoot with them sadly, but I did see them for their panel talk as well as meet them for signing sessions.

During the signing sessions, Sylvester and Sophie signed my DVD cover of ‘Remembrance of the Daleks’. I was so pleased they signed it as it’s one of my favourite Seventh Doctor stories from the ‘Doctor Who’ TV series. I greatly enjoyed chatting with Sylvester and Sophie and they seemed friendly. 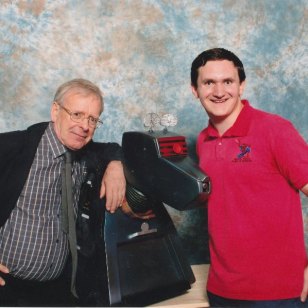 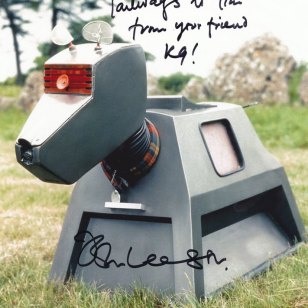 K9 from ‘The Stones of Blood’ signed by John Leeson (‘Tailwags to Tim from your friend K-9!)

I also saw John Leeson for the first time. He voiced K-9 in the ‘Doctor Who’ TV series. Meeting John Leeson was great. I had a nice chat with him as well as having a photo of K-9 signed by him and K-9. 😀 I also had a professional photo with John Leeson and K-9 at the comic con. It was pretty thrilling for me!

I also saw Karen Gillan for the first time. She played Amy Pond in the ‘Doctor Who’ TV series. Although I didn’t get to meet Karen during a signing or a photo shoot, I did see her panel talk at the event. By this point, the first half of Series 6 had been on TV and it wasn’t long before the second half was on TV.

The last guest I saw at the comic con was Brent Spiner who played Data in ‘Star Trek: The Next Generation’. I was in awe of Brent Spiner. I attended his panel talk and met him during a signing. He signed my DVD cover of ‘Star Trek: First Contact’. I’m pleased since it is my favourite ‘Star Trek’ movie.

I planned to see other ‘Doctor Who’ guests like Camile Coduri; Sir Derek Jacobi; Jeremy Bulloch; Louise Jameson and Richard Franklin as well as guests like Christopher Lloyd and Lea Thompson from ‘Back to the Future’ and Walter Koenig from ‘Star Trek’. But due to timings and nervousness, I wasn’t able to.

The ‘London Film & Comic Con 2011’ event was a huge learning curve for me in terms of attending conventions. I was pretty overwhelmed by the event, finding it busy and pricey. But I did enjoy attending the event and as the years went on I got better with understanding how these events work.

The highlight of course was seeing Sarah Sutton as she’s my favourite ‘Doctor Who’ star. I’m pleased I gained something from the event by seeing her and was looking forward to seeing her at the next convention. The ‘London Film & Comic Con 2011’ was the beginning of good things to come in 2011.

By the way, in case you hadn’t noticed, I was wearing my ‘Spider-Man’ T-shirt for the day! 😀

Stay tuned for my next ‘convention memories’ blog post, which will be on the ‘Regenerations 2011’ convention that I attended in September 2011.