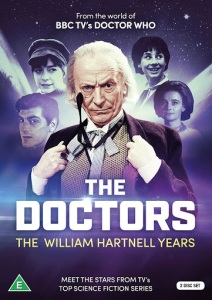 As I’m currently not going to conventions because of the coronavirus pandemic and with the UK being in lockdown – please keep safe – I’m grateful to my parents that I had four ‘Myth Makers’ DVD compilations of ‘Doctor Who’ interviews for my birthday back in May. They’re a close thing to be at a convention. They may have been done in the 1980s and the 1990s, but they’re enjoyable to watch.

The four ‘Myth Makers’ compilation DVDs I had for my birthday include interviews with stars from the William Hartnell era, the Patrick Troughton era, the Tom Baker era and the Sylvester McCoy era. I’m currently looking forward to ‘The Doctors: The Peter Davison Years’ DVD which will be released sometime in November 2020. I’m looking forward to seeing the Sarah Sutton interview on that DVD.

‘Myth Makers’ is a ‘Doctor Who’ interview series produced by Reeltime Pictures. As well as the Sarah Sutton interview, I’ve also seen a ‘Myth Makers’ interview with director Peter Grimwade. I’ve reviewed them on my blog. I’ve also seen interviews with Wendy Padbury, Katy Manning as well as producer Barry Letts and writer/script editor Terrance Dicks. I’m pleased I’m catching up with these.

I hope to do an advent calendar of ‘Myth Makers’ reviews soon. Maybe not for this year, but hopefully next year! But for now, I’d like to share with you some quick thoughts on what I make of the four ‘Myth Makers’ compilation DVDs I’ve had for my birthday. I’ll review each of these DVDs in turn. To start off, let us talk about ‘The Doctors: The William Hartnell Years’ DVD, which I’ve enjoyed.

The DVD starts off with an introduction by director/producer Keith Barnfather as well as interviewer Nicholas Briggs (who is well-known as the voice of the Daleks and a director/writer of many Big Finish audios). Nick Briggs presents many of the ‘Myth Makers’ features and he interviews the stars. 😀 I enjoyed Keith Barnfather and Nick Briggs’ casual manner during the introduction for this DVD. 🙂

The first feature on the DVD is a William Hartnell tribute. This was nice to watch and it featured Nicholas Briggs interviewing Jessica Carney, who’s the granddaughter of William Hartnell and the author of ‘Who’s There: The Life and Career of William Hartnell’. She provides interesting insight into what her grandfather is like in terms of his career choices and how he ended up doing ‘Doctor Who’.

There are also interviews with the people who knew him, including producer Verity Lambert, William Russell, Carole Ann Ford, Maureen O’Brien and even ‘Doctor Who’ extra Jack Pitt. It was fascinating to know more about William Hartnell as an actor and what he was like as a person in real life. William Hartnell was a big star before he did ‘Doctor Who’ and it’s well reflected during this tribute.

Next up is an interview with Carole Ann Ford who played Susan in ‘Doctor Who’. I enjoyed Carole Ann Ford’s interview. I’ve only met her briefly at the ‘Project Motor Mouth 2’ convention in August 2013 where she signed the ‘Hunters of Earth’ CD cover for me. It was nice to see her be interviewed by Nick Briggs and share what her acting career was like and how it wasn’t great as she had hoped.

Originally, there was an interview with Carole by Nick Briggs at her home in 1985 I believe and it was shot in black-and-white. But that was interview was fraught with production problems. Thankfully, Nick Briggs interviewed Carole again in the 1990s and they combined both the 1985 and 1990s interview sections together. I liked how Carole’s little daughter made a cameo in the 1985 interview.

There’s then a tribute to Jacqueline Hill who played Barbara in ‘Doctor Who’. Sadly Jacqueline died before she did a ‘Myth Makers’ interview. There’s some footage of Jacqueline Hill at a ‘Doctor Who’ convention where she answered questions to fans. I found that nice to watch, even if the audio quality’s not great. It’s a shame Jacqueline didn’t do many more conventions after doing that one. 😦

The tribute also features interviews with producer Verity Lambert, William Russell, Carole Ann Ford, Maureen O’Brien and Jacqueline Hill’s husband Alvin Rakoff. It was fascinating to hear more about what Jacqueline Hill was like as a person. Everyone speaks highly of Jacqueline, saying that she was a sweet, lovely person to work. It’s a big shame that Jacqueline died tragically because of breast cancer.

The William Hartnell, Carole Ann Ford and Jacqueline Hill features are on Disc 1. On Disc 2, there’s the William Russell interview next. I enjoyed the William Russell interview and it was fun to watch him and Nick Briggs being in London where ‘The Dalek Invasion of Earth’ was filmed close to Trafalgar Square. It was also fun to see them catching a red double-decker bus, echoing ‘The Chase’.

It was nice to hear William Russell share his life and career before, during and after ‘Doctor Who’ to Nick Briggs. I’ve met William Russell twice at conventions in Bournemouth, August 2015 and London, March 2019. Sadly they were brief meetings between me and him, but I’m very pleased I met him and I’m equally pleased I got to see this interview. William Russell exhumes a nice casual manner. 😀

The ‘Myth Makers’ interview he did was filmed at his house at the time in the 1990s. It was nice to see how he and his family spent four months refurbishing the house as well as sharing his career in acting before and during ‘Doctor Who’ as well as after when he went on to be a ‘Blue Peter’ presenter. It was rather amusing seeing Peter walk his two big dogs with Nick Briggs from his house.

The final feature of the DVD is an interview with Jackie Lane who played Dodo in the TV series. I’ve never met Jackie Lane at a convention since she rarely does them and she’s never reprised Dodo in any of the Big Finish audios, which is a shame. I do have a signed photo of Jackie from ‘The Ark’ and she did make a cameo in ‘Doctor Who Live: The Afterparty’ for the show’s 50th anniversary on TV. 🙂

This ‘Myth Makers’ interview she did with Nick Briggs is the closest we can get to know more about Jackie Lane as an actress and how she found the experience of playing Dodo in ‘Doctor Who’. I enjoyed her interview and Jackie seems a nice person. I’m not a fan of the editing in the interview. It would’ve been a lot better it if Nick interviewed Jackie just inside the TARDIS against a green screen.

Overall, ‘The Doctor: The William Hartnell Years’ DVD has been very enjoyable indeed. It’s a shame there isn’t a Maureen O’Brien interview and an Adrienne Hill interview to accompany the DVD. Otherwise, I enjoyed the tributes to William Hartnell and Jacqueline Hill as well as the interviews with Carole Ann Ford, William Russell, Peter Purves and Jackie Lane. They’re very insightful and fun.

I’m looking forward to checking out ‘The Doctors: The Patrick Troughton Years’ DVD next!