Yes! The ultimate ‘Star Wars’ fan! He’s followed my ‘Star Wars Film Review Season’! He wants to do a crossover review with me on ‘Star Wars: Episode VI – Return of the Jedi’! But I won’t let him! Oh no! He’s not going to get to have a chance to have his say on a ‘Star Wars’ movie! Oh yes! I will see that… 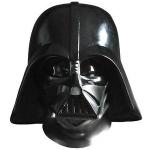 (annoyed) Oh no! Not you, Darth Vader! What is it with you?! You’ve been appearing on my ‘Star Wars Film Review Season’ these past four weeks!

(puzzled) Hey? What do you mean, Vader?

Darth Vader: “I’ve always been here on your ‘Bradley’s Basement’ blog! I’ve been appearing in your ‘Star Wars Film Review Season’ these past six weeks!”

(baffled) What?! How’s that possible! You didn’t appear in the first two weeks with ‘The Phantom Menace’ and ‘Attack of the Clones’!

Darth Vader: “You’re wrong again, Master Bradley! I implanted myself into your thoughts when you announced me!”

(more baffled) Vader, you’re making no sense! What are you talking about?!

At that moment, Darth Vader begins to take off his mask.

(scoffs) No, no, Vader. You’re not going to surprise me with who you are behind that mask! I know who you are! You’re Anakin Skywalker! So don’t expect me to be surprised by you revealing yourself to me. Because I won’t!

Darth Vader ignores Tim and takes off his mask…to reveal himself as…TIMELORD007!!!

(shocked) No! No! That’s not true! That’s impossible!

Timelord007: “Search your feelings, Tim! You know it to be true!”

Tim sobs away for a few moments.

‘The Empire Strikes Back’ as walking machines attack Rebel base on icy world Hoth! Luke Skywalker gets separated from his friends! He and R2-D2 go to Dagobah! There they meet Yoda, now a Muppet again! But what of Luke’s friends?! They meet Lando Caalrissian, who betrays them to Darth Vader!

Han Solo gets frozen up and taken away by bounty hunter Boba Fett, son of that bounty hunter from ‘Attack of the Clones’! Luke fights Darth Vader! Vader tells him he’s his father and Luke screams “NO!!!” like Buzz Lightyear did in ‘Toy Story 2’! Luke gets rescued by Princess Leia! How was it done?!

Will our heroes be able to rescue their friend Han Solo in the final film of the original trilogy?! 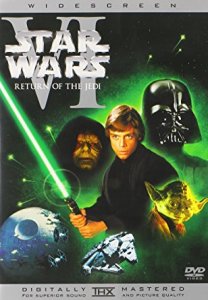 And now we’ve come to the final film of the ‘Star Wars Film Review Season’! This week, it’s ‘Star Wars: Episode VI – Return of the Jedi’. The review is on today by me with special guest star: Timelord007!

Timelord007: “You don’t know the power of the dark side!”

(sighs) This is going to be wild ride, isn’t it?

Please check out the review by me and Timelord007 on ‘Star Wars: Episode VI – Return of the Jedi’ by clicking on the link. Please feel free to read and comment on the review.

(relents) No, it’s not. I’ve still got the sequels trilogy and ‘Rogue One’ to review next!

Okay, okay. Maybe I’ll get onto watching and reviewing ‘The Force Awakens’ before ‘The Last Jedi’ comes out at the cinemas in December 2017. But for now, this is where the ‘Star Wars Film Review Season’ ends on ‘Bradley’s Basement’ blog this year. Although, stay tuned! There may be a surprise!

If you want to check out my current reviews on ‘Star Wars: Episode VII – The Force Awakens’ and ‘Rogue One: A Star Wars Story’ on my ‘Bradley’s Basement’, click on the links to find out. I’m currently looking forward to seeing ‘The Last Jedi’ at the cinema in December. I’ve seen the trailer for the movie and it looks very impressive!

In the meantime…Enjoy ‘Return of the Jedi’!

Timelord007: (impersonates Darth Vader) “We would be honoured if you would join us!”

(sighs; realises) I see what you did there, Timelord! (to audience) There’s also my other ‘Star Wars’ DVD reviews to check out!