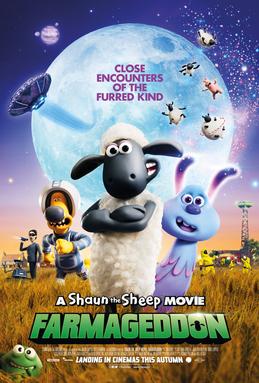 Back in December 2015, I reviewed the ‘Shaun the Sheep Movie’ on DVD and ‘Shaun the Sheep: The Farmer’s Llamas’ on TV. It’s nice to go back to this again! Shaun the Sheep was first introduced in ‘Wallace & Gromit’ in the short film called ‘A Close Shave’. Shaun has been popular over the years! 😀

As well as appearing in ‘Wallace & Gromit’, Shaun has had his own TV series via CBBC. In that, he’s a sheep on a farm run by the Farmer and he has friends like Bitzer the dog; Timmy, who is Shaun’s cousin; and the rest of the flock. Shaun and his friends have had many mischievous TV and film outings.

What makes the ‘Shaun the Sheep’ CBBC series unique on TV and in film is that they’re presented as silent films. There’s no dialogue spoken by the main characters. With the sheep and other animals making animal noises and with the humans ‘umming’ and ‘ahhing’, it makes it very enjoyable to watch.

This year, we have the sequel to the ‘Shaun the Sheep Movie’ called…‘A Shaun the Sheep Movie: Farmageddon’. I enjoyed seeing this movie at the cinema with my parents recently. The film had an outer-space Sci-Fi theme to it this time round. This really appealed to me due to my interests in sci-fi.

‘Farmageddon’ has Shaun discovering a cute little alien called Lu-La, who crash-lands to Earth near Mossy Bottom Farm. Lu-La looks like a blue dog-like creature. He has extraordinary powers with his ears. Shaun and Lu-La get on well with each other in this. Shaun also helps Lu-La to get him back home.

Lu-La misses his parents whom he calls Ub-Do (Dad) and Me-Me (Mum). 😀 But as Shaun and the flock help the cute little alien to return home and prevent ‘Farmageddon’ (Get it? Alien invasion? 😀 ), they have trouble with Agent Red who wants to abduct Lu-La herself. Will Shaun not mess things up here? 🙂

I found this film a lot of fun to watch and much better than ‘Early Man’ from last year. It’s a superb Aardman Animations film that’s well-suited for kids. It has plenty of laughs and some good emotional connections, especially as our main characters spoke without any dialogue through facial expressions.

The Farmer even dresses up in a ‘Star Trek’-like uniform that looks like one from the ‘Original Series’ movies from ‘II’ to ‘VI’. This is when the Farmer sets up as a fairground for the ‘Farmageddon’ thing that is happening in the farm area. He also gives no refunds to customers with putting a shabby effort.

It was amusing to see Shaun and Blitzer’s relationship in the film as Blitzer kept putting ‘NO sheep doing something signs’ in order to prevent the sheep getting into mischief. Shaun’s mischief gets the better of him when he orders too many pizzas on Lu-La’s ship. It causes the ship to crash back to Earth.

Agent Red also has an interesting backstory with seeing Lu-La’s parents as a kid and drawing a picture of them to which she was ridiculed for at school. She also has yellow suited figures that might’ve come from ‘Monsters Inc’ that never take their helmets off. She also has a robot Mugg-1N5 working for her.

‘Farmageddon’ has been a very enjoyable ‘Shaun the Sheep’ movie to watch at the cinema. I’m glad I saw it as I had fun seeing it. It satisfied the sci-fi interests I had with a cute little dog-looking alien meeting Shaun. There are some funny jokes connected to sci-fi things that I’ve enjoyed over the years.