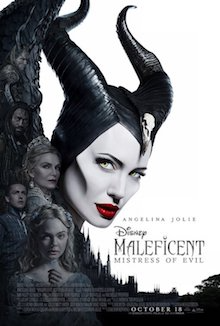 After seeing the movie ‘Maleficent’ on Disney+, it wasn’t long before my parents and I saw its sequel ‘Maleficent: Mistress of Evil’ on Disney+. I’m glad I’ve seen these ‘Maleficent’ movies as my curiosity has been satisfied. With that said, I still believe the 1959 ‘Sleeping Beauty’ film is better than them. 🙂

In case you haven’t read my ‘Maleficent’ review, I wasn’t won over by it since it wasn’t the full-on ‘Joker’-like Disney villain movie I expected it to be. Instead it ended up being a ‘Venom’-like movie where the anti-hero you think is all evil ends up being a goodie in the end. That’s very disappointing.

Mind you, could the sequel be better? Well, it’s hard to judge. For one thing, the movie’s title is an all-out lie. Maleficent isn’t the ‘mistress of evil’ as you would expect her to be in these movies. In fact, by the end of this film, it’s all a happy lovey-dovey ending. That isn’t what I expect in a villain movie!

I don’t understand these ‘Maleficent’ films. How can you make one of the best villains from a 1959 animated Disney movie turn out to be a villain-turned-good in two of her live action films? It’s nonsensical. And this sequel only came out last year in 2019. I’m glad I didn’t see it at the cinema. 😀

The good stuff to be said about this film? Well, it is…written better, I suppose. There are some annoyances with certain characters featured, but I did find myself compelled to watch this film compared to the lacklustre efforts of the previous movie. And the cast deliver superb performances.

The movie takes place five years after the events of the first film. Aurora, who’s now Queen of the Moors, receives a proposal of marriage from Prince Phillip, to which she accepts. Maleficent disapproves of the union, but Aurora is determined to marry Phillip, saying she sincerely loves him. 🙂

We get to the ‘Shrek 2’/’Meet the Parents’ set-up of Aurora, Maleficent and Diaval meeting Phillip’s parents. However, things don’t go well when the Queen taunts Maleficent throughout the evening. Soon, the King becomes cursed and it builds up to a war between Maleficent’s kind and humanity. 😮

Like I indicated, there are inconsistencies in terms of the storytelling and how Maleficent is portrayed as an anti-hero. I would’ve liked it better if the movie didn’t end on such a happy note especially when there was an all-out battle at the end. But the film’s tone is all over the place for me.

Angelina Jolie continues to deliver a good performance as Maleficent, despite not being given a good script to play off from. Elle Fanning returns to play Aurora as well as Sam Riley as Diaval, Maleficent’s raven who gets human form in the film. Sometimes the humour with the characters got me a laugh.

Mind you, we also have to put with the three annoying ‘good’ fairies from the first film, including Imelda Saunton as Knotgrass, Juno Temple as Thistlewit and Lesley Manville as Flittle. I don’t understand how these three ‘good’ fairies can be so annoying. They were superb in the original film!

The film features new characters in the ‘Maleficent’ world. There’s Michelle Pfeiffer (well-known for playing Catwoman in ‘Batman Returns’) as Queen Ingrith, who is the power-hungry Queen of Ulstead. I did wonder whether Ingrith was a witch like Maleficent, but I don’t think that’s the case. 😐

Suddenly, the window smashes as Deadpool crashes through. He has his pistol at the ready, locked and loaded.

Deadpool, will you get out of here! You’re interrupting my review!!!

Deadpool: “No! This is far too important than a mere review! My arch nemesis Francis is here and he must DIE!!!”

It’s not Francis, Deadpool! He doesn’t even look like Francis in this movie! He’s a horned guy with big flapping, flopping wings! No connection to Francis whatsoever! Kaput! No go away!

Deadpool: “He’s in disguise as he knows I’m looking for him! Face your executioner, coward!”

(gradually raises his voice) Will you listen, Deadpool! Ed Skrien is not Francis! He’s an actor! A flipping actor! He gets paid to be in films like ‘Patrick’, ‘Maleficent: Mistress of Evil’ and your first ‘Deadpool’ movie. He acts! That’s all! An actor! A-C-T-O-R! Full stop! An actor! He’s an actor! (Long pause; screams) AN ACTOR!!!!!!

Deadpool: “This is what he does! Gives you a false sense of security! Using disguises to hide his evil misdeeds!”

Oh Deadpool, you’re so thick! A thicky, thick, thicko! Next thing you’re going to suggest is that I’m not Tim Bradley and that I’m Francis in disguise.

Moment of silence as Tim sees Deadpool stare blankly at him.

(slightly uneasily; gradually) Okay, what are you staring at me like that?

Another moment of silence ensues. Deadpool continues to stare at Tim.

(uneasily) Deadpool, stop staring at me! You’re starting to freak me out!

Another moment of silence ensues.

Deadpool: “Okay, I err…I’m going to fetch something a minute here. I’ll be right back.”

Deadpool begins to walk away.

Deadpool, what are you doing? Where are you going?

Deadpool: “You just enjoy doing the rest of your review, Tim. Don’t mind me. I’ll be seeing you around soon. Later!”

Tim watches Deadpool walk off, continuing to stare at him as he leaves. He exits backwards out of the window he smashed through, still watching Tim as he goes.

(shakes head) Whew! Don’t what that was about. (to audience) The film also features…

Tim pauses to look at the smashed window. No one is there.

Tim looks to the smashed window again. Still no one there.

(spooked) Deadpool, will you get out of here!!!

Deadpool: “Who are you really, Tim Bradley? Billy Walker or perhaps….Francis?”

(sighs) Where was I? (thinks) Oh yes! (to audience) The film also features Harris Dickinson as Prince Phillip, the Prince of Ulstead and Aurora’s lover turned husband. Odd mind you. Prince Phillip was played by a different actor in the first film – Brenton Thwaites. Did Philip undergo a regeneration? 😀

There’s also Robert Lindsay as King John, the King of Ulstead, who’s peace-loving and unsuspecting of his wife’s treachery. There’s also Warwick Davis as Lickspittle, a de-winged pixie who reluctantly works for Queen Ingrith. I was surprised to discover that Warwick Davis was in this ‘Maleficent’ film.

Towards the film’s climax, I did think that Maleficent had actually been killed off and that would be the end of her. Instead, she transforms into a dragon like she did in the original film. Whilst I’m pleased she did turn into a dragon, it does feel like a cop-out when the supposed villain is resurrected.

So to sum up, ‘Maleficent: Mistress of Evil’ was an intriguing sequel to the first film. It’s good in some places but then it’s not so good in others. The performances of the cast were enjoyable and whilst I have enjoyed the ‘Maleficent’ films in a strange way, they don’t represent one of the best Disney films ever made that well in live-action, which is a shame as you’d think they would in these movies.

I don’t know if there’ll be a third ‘Maleficent’ movie anytime soon. It’ll depend on how much of a financial success the sequel was when it came out in 2019. At present, I’m not in a hurry to see it. I’m glad I’ve seen the two ‘Maleficent’ films on Disney+, but I won’t hurry to watch them again. My curiosity’s been satisfied and I do think Maleficent works better in the original ‘Sleeping Beauty’ film.

P.S. Going off on a tangent, I wonder how director Andy Serkis handled ‘Venom: Let There Be Carnage’, the sequel to the 2018 ‘Venom’ film. It probably won’t be great, but it should have some blood, gore and guts. Imagine Venom with blood dripping out of his fangs! That would be terrifying! 😀

(spooked; annoyed) WHY ARE YOU STILL HERE?!!!

Tim groans as he looks away from Deadpool. Deadpool still keeps staring at him however.