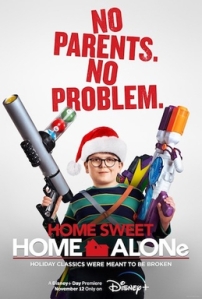 One of the things I’ve noticed about the ‘Home Alone’ films is that most people regard the first two films more highly than the latter four. Not many people like ‘Home Alones 3’ to ‘6’. This is understandable as the original ‘Home Alone’ film is the best and it’s quite pointless to do remakes of the same thing. 😐

For now, let me share with you what I think of ‘Home Alones 4’ to ‘6’ in general. My parents and I had a fun time watching from ‘Home Alone 6’ to ‘Home Alone 4’ to ‘Home Alone 5’ over one weekend. Even though we watched the films in November, we were really getting into the spirit of Christmas.

It’s also good to have all six ‘Home Alone’ films to watch on Disney+. ‘Home Alone 4’ (or ‘Home Alone 4: Taking Back the House’) is a strange instalment in the film series. I believe ‘Home Alone 4’ takes place in an alternative universe. It features Kevin McCallister who’s played by a different actor.

Yeah! Instead of Macaulay Culkin, it’s Mike Weinberg playing Kevin. It’s also worth noting that ‘Home Alone 4’ was the first film in the series to be shown on TV instead of at cinemas, The film focuses on Kevin attempting to defend his future stepmother’s house from his old nemesis Marv and his wife Vera.

Oh yeah, Kevin’s parents happen to be divorced in this film, which I couldn’t help be put off by. The new actors also playing the characters from the first two ‘Home Alone’ films don’t match to their original counterparts. I know it’s wrong in terms of the viewing, but I couldn’t help be entertained.

The film was directed by Rod Daniel, who also directed ‘Beethoven’s 2nd’. The film also features French Stewart as Marv (originally played by Daniel Stern in the first two films). There’s also Missi Pyle (who I’ve seen in Tim Burton’s ‘Charlie and the Chocolate Factory’ and ‘Stormbreaker’) as Vera.

There’s Erick Avari (who I’ve seen in ‘Daredevil’ and a couple of ‘Star Trek’ episodes) as Prescott the butler, Barbara Babcock as Molly the maid, Jason Beghe as Peter McCallister (originally played by John Heard in the first two films) and Clare Carey as Kate McCallister (originally played by Catherine O’Hara in the first two films). And there’s Joanna Going as Natalie Kalban, Peter girlfriend in the film.

Gideon Jacobs plays Buzz McCallister, Kevin’s older brother (originally played by Devin Ratray in the first two films) and Chelsea Russo as Megan McCallister, Kevin’s older sister (originally played by Hillary Wolf in the first two films). All in all, ‘Home Alone 4’ was very entertaining for my parents and me.

The film was directed by Peter Hewitt. It features Christian Martyn as Finn Baxter who moves into his new home from California to Maine with his family, including his sister Jodelle Ferland as Alexis Baxter, his mother Ellie Harvie as Catherine Baxter and his father Doug Murray as Curtis Baxter. I found this film a lot of fun to watch and it’s another one of those films that was first shown on TV. 🙂

The criminals featured in this film include Malcolm McDowell (who I’ve seen in ‘Star Trek: Generations’) as Sinclair. He’s joined by two accomplices, including Debi Mazar as Jessica and Eddie Steeples as Hughes. The three criminals attempt to steal a painting from a safe in the Baxter’s home.

There’s also a special appearance of the late Edward Asner as Mr. Carson, Catherine Baxter’s boss. Having seen Ed Asner in ‘The Mary Tyler Moore Show’, the film ‘Elf’ and heard him as J. Jonah Jameson in the ‘Spider-Man’ 1990s animated series as well as the film ‘Up’ and its sequel series ‘Dug Days’; it was nice to Ed Asner in this ‘Home Alone’ film. I found him entertaining to watch in the film.

I enjoyed the obsessive video game aspect to Finn’s character, especially when he interacted with Bill Turnbull as Simon, a fellow gamer. I know the latter ‘Home Alone’ films aren’t appealing in many people’s eyes, but having watched them on Disney+ lately, I can see their potential value in general.

Speaking of which, the sixth and latest film in the series ‘Home Sweet Home Alone’ hasn’t really appealed to many people, both critics and audiences, when it was released on Disney+. This is a shame, since I think the film does have potential, even if it’s misguided in certain places throughout.

The film was directed by Dan Mazer and it features Archie Yates (who was in ‘Jojo Rabbit’) as Max Mercer. There’s also Rob Delaney (who was in ‘Deadpool 2’ and ‘Tom & Jerry’) as Jeff McKenzie and Ellie Kemper as his wife Pam. Jeff and Pam are the ‘Home Alone’ criminals burgling into Max’s home.

I found the film taking an interesting direction in placing sympathy on Jeff and Pam as burglars when they’re trying to raise money to keep their house and trying to steal a doll that’s worth a fortune from Max’s home. It’s a flawed approach in terms of storytelling, but I found it quite enjoyable enough.

I was disappointed we didn’t get a special cameo of Macaulay Culkin as Kevin. That could have saved the film. Instead, we have Devin Ratray as Buzz back from the first two films and working as a police officer. It was nice to see Buzz, although my parents didn’t realise it was him when we saw him. 😀

So yeah! ‘Home Alone 4’, ‘Home Alone: The Holiday Heist’ and ‘Home Sweet Home Alone’ aren’t what you would consider great ‘Home Alone’ films compared to the first two films. But with that said, they have been entertaining to check out. I’m hoping that I will revisit them in full detail on my blog.