This event took place at the Copthorne Hotel Slough-Windsor in Slough. This ended up being a special venue as it turned out to be a filming location for Peter Davison’s 50th anniversary special ‘Doctor Who’ spoof called ‘The Five(ish) Doctors Reboot’. I’ll share more about this later on in these ‘memories’.

The first ‘Project Motor Mouth’ event happened in January 2013 and it had Janet Fielding with five Doctors – Peter Davison, David Tennant, Paul McGann, Colin Baker and Sylvester McCoy. Unfortunately, I couldn’t attend the convention as it sold out by the time I could purchase a ticket. 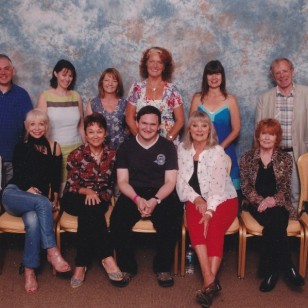 Thankfully she recovered and I was able to see Janet at ‘Project Motor Mouth 2’ along with the other companions. It was the first of many meetings with Janet Fielding at conventions for me. I had no idea that I would be meeting Janet more than once and alongside Peter Davison and Sarah Sutton. 🙂

The day began with a group photo shoot with all of the twelve companions at the event. I’m pleased to have had my photo taken with Janet, Sarah, Matthew, Carole, Anneke, Debbie, Katy, Louise, John, Lalla, Sophie and Lisa. I have yet to come up with a good plot for my ‘Thirteen Companions’ story. 😀 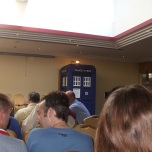 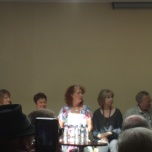 An Ood and a Vashta Nerada were attending the event as well as a Dalek, a Haemovore, a Voc Robot and Scaroth. 😀 We then had an on-stage panel talk with the companions, introduced by Robert Dick. I enjoyed the panel talk very much, though I didn’t get to ask any questions to the companions.

There was then a charity auction where the companions were led by Janet and there were certain ‘Doctor Who’ items donated including a special Russell T. Davies script for ‘Midnight’ and a chance to visit the Big Finish studios. I purchased an Elisabeth Sladen-signed ‘Sarah Jane Adventures’ postcard at the auction.

There was a lunch session before we went onto the signing sessions. I managed to get most items signed by the companions and actually got to have some nice chats with some of them. Sophie Aldred (Ace) remembered me from a previous event and she signed my CD cover of ‘Shockwave’. 😀

I got to meet Debbie Watling (Victoria) and we had a nice chat where she signed my original DVD cover of ‘The Tomb of the Cybermen’. I first met Carole Ann Ford (Susan) at the event! I didn’t get to chat to Carole much as it was a brief meeting, but I’m pleased she signed my CD cover of ‘Hunters of Earth’.

Sadly, Katy Manning (Jo) had to leave the event due to being ill, which is a shame, but I hoped to see her at a future convention. It was nice to see Anneke Wills (Polly) at the event and she signed my CD cover of ‘The Power of the Daleks’ TV soundtrack. It was also very nice to see Louise Jameson (Leela).

Louise signed my DVD cover of ‘The Sun Makers’. I got to meet Lalla Ward (Romana) for the first time at a convention. I enjoyed chatting to Lalla at ‘Project Motor Mouth 2’ and she graciously signed my CD cover of ‘Babblesphere’ as we talked about Douglas Adams’ writing, ‘Shada’ and such.

William Russell was meant to attend the event, but sadly he had to bow out at short notice. Chase Masterson (who played Leeta in ‘Star Trek: Deep Space Nine’ and plays Vienna Salvatori for Big Finish) also attended the event as well as other Big Finish writers I sadly didn’t get a chance to meet.

Simon Fisher-Becker (Dorium Maldovar) was also in attendance, but I can’t recall seeing him and I didn’t get the chance to meet him. The event was so busy what with the auction going on that I didn’t have the time to meet everyone, which is a shame. I also didn’t get many photos with people.

I got to meet Peter Davison (the Fifth Doctor) briefly at the convention when he signed stuff, but he couldn’t be there for long as he was making ‘The Five(ish) Doctors Reboot’ at the time. I told him that Nyssa is my favourite ‘Doctor Who’ companion and he gave a little cheer, seemingly pleased about it.

He also signed my original DVD cover of ‘The Visitation’ at the time. So yeah, I had no idea that ‘The Five(ish) Doctors Reboot’ was being filmed until I actually saw the spoof in November 2013. I believe Peter’s daughter Georgia Tennant née Moffett was in Slough at the time since she was the producer of the spoof.

It’s amazing Peter filmed the dream scene with the companions haunting Steven Moffat in ‘The Five(ish) Doctors Reboot’ as well as certain scenes where Peter arrived at the hotel. Most of us fans attending ‘Project Motor Mouth 2’ were unaware a great anniversary spoof was in the making here. 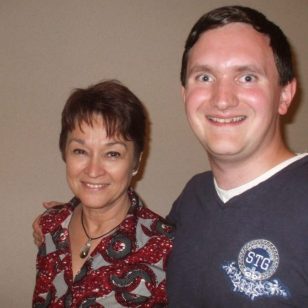 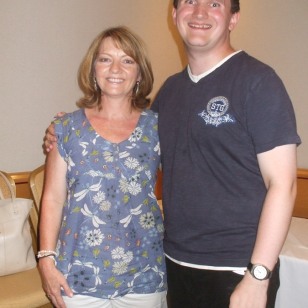 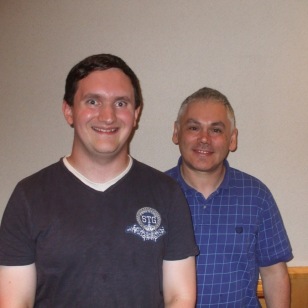 Of course, I soon got to meet and chat to Peter Davison’s companions Janet Fielding (Tegan), Sarah Sutton (Nyssa) and Matthew Waterhouse (Adric) at the event. Janet was first and she said “Hiya Tim!” to me. 😀 She soon signed my DVD cover of ‘The Visitation’ and my CD cover of ‘Smoke and Mirrors’.

It was lovely to see Sarah at the convention. I said to her “We’ve met before, haven’t we?” She played along and went “Let me think. Um…once or twice.” 😀 I enjoyed chatting with Sarah; shared a joke with her and she signed my DVD cover of ‘The Visitation’ and my CD cover of ‘Prisoners of Fate’.

It was great to meet Matthew Waterhouse at ‘Project Motor Mouth 2’. He signed my DVD cover of ‘The Visitation’ and I told him I’d just finished reading his memoirs ‘Blue Box Boy’. I’m thankful that I managed to have photos with Sarah Sutton, Janet Fielding and Matthew Waterhouse at the event. 🙂

I had individual photos with Sarah, Janet and Matthew before getting a group shot with them. Having that group of me with Matthew, Janet and Sarah is a treasure for me. I went on to write a ‘Doctor Who’ story featuring the Fifth Doctor, Nyssa, Billy, Tegan and Adric which I will share soon. 🙂 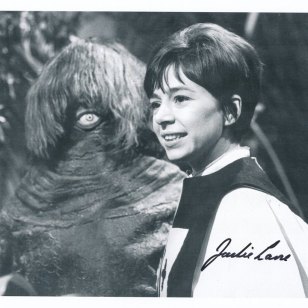 ‘Project Motor Mouth 2’ was where the 50th anniversary celebrations of ‘Doctor Who’ began for me. I’m glad I attended the event as I got to meet many companions, have photos with Sarah, Janet and Matthew and meet Peter Davison for the first time. More exciting things were to come in 2013! 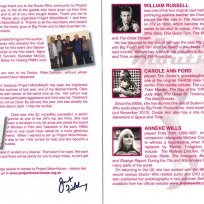 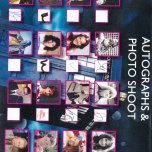